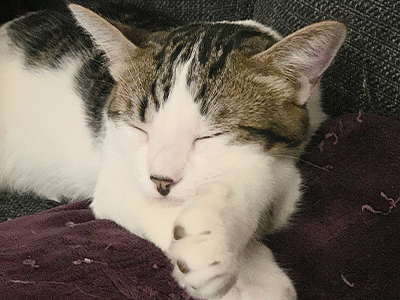 Meet Cooper! He’s about a year old and has endless energy. He was surrendered as a street cat at a pet hospital in Los Angeles, where he had to have a diaphragmatic surgery. He’s been through a lot in his young life, but his spunk is not dampened in the slightest!

We’ve had him for three months, but we think he needs to go to a home that can meet his high energy and socialization needs! Unfortunately, we cannot afford to get another pet. He loves attention, chin scratches, and LOVES to play fetch. He is very curious about the world and affectionate. When he’s not running around chasing his favorite mousey, he loves to take long naps on the couch or in his cat tree.

He was fostered and socialized for 6-months with two small terriers. He’s a bit of a goober and doesn’t realize his strength or intensity when playing. Cooper is energetic, play-motivated, and LOVES to be the center of attention! He loves to be scooped up and snuggled, but will let you know when he wants to get back to playing. He does not show signs of malicious aggression, but he needs a lot of stimulation to keep him occupied.

He may need a household with other pets. Because he had a diaphragmatic surgery, he is sensitive around his tummy, but otherwise loves to be scratched behind his ears and under his chin. He’s really an all-round fun, silly, spunky cat to have around and a good midday snuggler. We’re sad that we have to rehome him but we want to make sure he’s getting the stimulation he needs. He is current with vaccines, has a microchip, and potty trained.