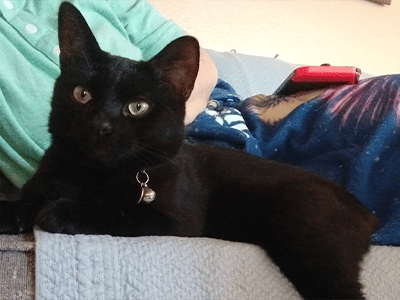 A few things to note, he will most likely take a long time to adjust to a new home. He is a very scared boy when he is introduced to new people. My parents did have dogs (they were basset hounds and were very mellow) and he did fine with them but I am not sure if he would do great with any high-energy dogs, my parent’s dogs left him alone for the most part.

He doesn’t do well in smaller homes, we had to take in my mom’s cat for a couple of months before they rehoused her (the one we originally adopted him for, they were bffs!) and he became increasingly aggressive with her while they were here at the apartment. We had to keep all the cats separately and it was very stressful for them all. Which is another reason I believe our living situation is not giving him the best life he could possibly have.

With all that being said Rush, alone, is an absolute angel. He’s the sweetest most talkative boy who will eat anything. He loves to cuddle and play with his string toys. He loves anything with feathers that moves. He looooooves his food, he has even learned some tricks for food and will eat almost anything you offer him (chicken nuggets are his favorite). He’s loud when he’s hungry and he’ll make sure you know it’s feeding time. He gets around on his own just fine, he climbs to the top of our 6ft cat tree no problem. He uses the litterbox on his own and the cat scratchers just fine.

He really is a very good boy when it’s just him. It breaks my heart we couldn’t get him to be comfortable with our other cat. He loves to go outside and bird watch with his harness on. At nighttime, he likes to get right next to or on top of you and knead away with the loudest purrs. He’s a very goofy boy who will throw a fit if you walk by him without saying hi, he’ll throw himself to the ground and reach a paw out as you pass!!

He’s got a big personality and a big meow to go with it! He doesn’t like when you close the door on him and likes to follow everyone into the bathroom. He’s never turned away any cat food we’ve given him and loves to take bits of anything you’re having (as long as it’s safe for him to eat). Because Rush is such a shy boy with lots of anxiety, a big, quiet home with just him would suit him best.

He loves widow perches and we have a pet staircase for him to reach one of the windowsills for him to watch the birds outside. Let me know if you have any questions or need anything else from me. I want to do everything I can to get him to a good home where he can have the space to roam around and play and get all the cuddles he deserves.