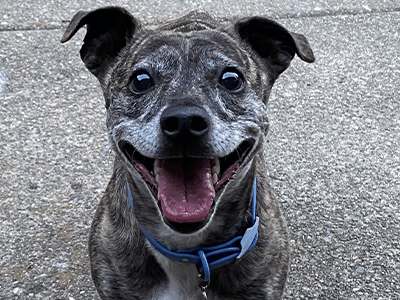 Tonks has been a beloved member of our family since April 2016, when she was rescued at 6-9 months. She remains shy around new people, but warms up quickly with a few of her favorite treats, and her silly and playful personality shines. Tonks can be a very active girl — she enjoys long hikes, walks around the block, playing fetch in the pool, or frisbee in the yard. However, she is truly happiest when she is curled up on the couch in a blanket sandwich (a la Princess and the Pea) next to her favorite people and is not a dog that needs to be entertained. While she is crate trained, she can also be trusted to nap on the couch while her owners are at work.

Health: Tonks has been a very healthy dog with minimal health concerns. She has environmental and food allergies that have been well-managed with seasonal anti-itch medicine and a prescription diet. While she has anxiety, she has been thriving on her anti-anxiety medication and is much less afraid of noises and new things.

Areas of Concern: Tonks will walk nicely with our other dog but is aggressive towards other dogs on leash. She will walk by other pups but will respond if they bark or pull towards her. She is a resource guarder towards other animals, which means that she will do things like growl and protect items that she thinks are hers. While Tonks was raised around cats and other dogs, and previously done very well as long as food wasn’t part of the picture, she has recently started guarding resources like the couch, sticks, and her people. This has created an unpredictable inter-pet dynamic that has led us to keeping her separated. While we are heartbroken that we need to rehome her, we feel like this separation is not fair to her and is also not sustainable as we are expecting our first child in May.

Tonks would do best in a home with no other animals. She has never displayed aggression towards people and has previously met children and done well. However, she has not lived with small children before and we do not know how she would fare with toddlers or infants. As mentioned above, she loves to go for a walk but is also great in a quiet environment cuddled up on a couch. She would ideally be placed in a home with a yard, to avoid frequent run-ins with other pups for potty breaks. She has lived with and without a dog door, and does well indoors while her owners are at work in either situation. Tonks has had pet insurance since she was first adopted that can be transferred uninterrupted to a new guardian.